For our April Franciscan Calendar Saint, Franciscan Sisters of Christian Charity highlight Saint Zita. Interestingly, even though she is remembered as a humble care taker of others’ homes, Dante in his Divine Comedy: Inferno, 21, v 38, expected his audience to know something about her. A follower of Saint Francis of Assisi’s Gospel living, her presence at daily Mass, fed her goodness and others’ needs. 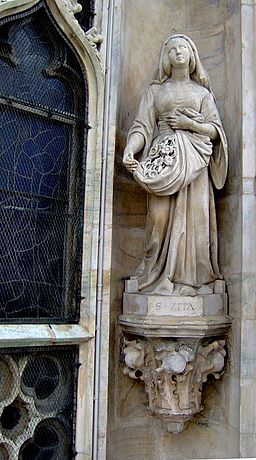 As a peasant girl at age 12, Zita began work as a servant in nearby Lucca. She was a pleasant person, who worked hard and was thoughtful of the poor. After years of working, the faithful servant became the head housekeeper. It was at this time that miracles began to happen especially with her concern for the hungry. It was told that one day she was caught by another servant taking leftover bread from the Fatinelli family to feed the poor. This servant reported her actions. When faced with the situation, the head of the household pulled open Zita’s apron, and instead of bread, only flowers fell to the ground. Another time, Zita remained in church past the usual hour of her bread-making for the family. She hastened home, all the while accusing herself of neglecting her duty, and found the bread made and ready for the oven. She never doubted that one of the family or one of the other servants had kneaded it, and going to them, thanked them; but they were surprised. They had not thought to make the bread.

According to legend, when she died at age 60, the church bells spontaneously began to toll. A bright star was also to have appeared above her attic. In 1580, her body was exhumed and found to be incorruptible. Her body remains today on display in a silver casket in San Frediano Church where she had prayed while alive.

Quote: “A servant is not holy if she is not busy; lazy people…is fake holiness.”
St. Zita, lover of Christ and the poor, pray for us.