The Fifteenth Sunday Gospel could not be more Franciscan, Fr. Paul Gallagher, OFM offers a Scriptural Reflection. This content is edited by Franciscan Sister of Christian Charity Sister Anne Marie Lom and Joe Thiel. The excerpts from the Sunday readings are prepared by Joe Thiel. To read or download the complete pdf with excerpts for your prayer, please click here: Franciscan Gospel Reflection July 11 2021 .  Excerpts are from the Lectionary for Mass for Use in the Dioceses of the United States of America, second typical edition © 2001, 1998, 1997, 1986, 1970 Confraternity of Christian Doctrine, Inc., Washington, DC. Used with permission. All rights reserved. No portion of this text may be reproduced by any means without permission in writing from the copyright owner. Image: http://www.marysrosaries.com/collaboration/images/7/73/Jesus_Sent_Them_Out_Two_by_Two_001.jpg 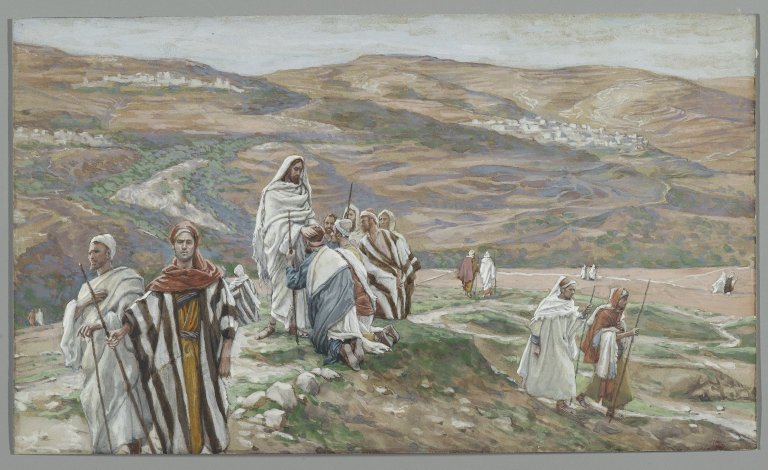 Jesus summoned the Twelve and began to send them out two by two and gave them authority over unclean spirits. He instructed them to take nothing for the journey but a walking stick – no food, no sack, no money in their belts. They were, however, to wear sandals, but not a second tunic. He said to them, “Wherever you enter a house, stay there until you leave. Whatever place does not welcome you or listen to you, leave there and shake the dust off your feet in testimony against them.” So they went off and preached repentance. The Twelve drove out many demons, and they anointed with oil many who were sick and cured them.

In last Sunday’s gospel (Mark 6:1-6) Jesus had returned to his native place accompanied by his disciples. The people were astonished at Jesus’ teaching, but they found it difficult to accept him because they knew him and his family. That text concluded with Mark stating that it was difficult for Jesus to perform any mighty deeds there.

Today’s gospel follows almost immediately after that text. The last half of verse 6 has been omitted, which states that Jesus left his hometown and began to preach in neighboring villages. The omitted section gives the context for Jesus gathering together the disciples and sending them out with his authority and message.

Jesus’ instruction as recorded by Mark gives the apostles permission to wear sandals and take a walking stick, but in the other two synoptic gospels, even these were forbidden. The apostles are also instructed not to take any money, not even the small amount that could have been carried in a belt. They must rely on one of the most honored virtues of people of the day, hospitality, and God.

Travel during Jesus’ time was considered unnecessary and therefore a suspicious activity. Family and neighbors provided everything that a person needed. A person often died within the same household where they were born. In such a culture, strangers were naturally looked upon with suspicion. But they also brought news of the outside world and the possibility of an allegiance that could be beneficial. Therefore, hospitality to strangers was highly valued. Guests were offered food, board, and safety from others who would at the same time be suspicious of their intentions.

Jesus sends the Twelve out two by two. Traveling in pairs would provide a degree of safety, companionship, and a measure of credibility. Two is the number of witnesses necessary to establish the truth of one’s claim. Jesus sends them out also with authority over unclean spirits. The last verse of the text states that they preached, performed exorcisms, and healed through anointing. This is the same ministry that Jesus himself had taken on as described in the first chapters of Mark’s gospel, and it is what he tried to bring to his native place in the text that precedes this one. However, it is clear that the disciples do not do this on their own. Jesus has entrusted them with his power. They act as his ambassadors.